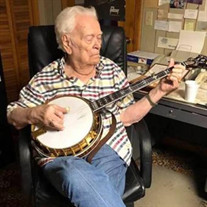 McPeake, William Curtis, age 93, of Mt. Juliet, TN, died February 20, 2021. A veteran five string banjo player and recording artist, Curtis is originally from a small town of Scotts Hill in west Tennessee. He was born in October 9, 1927 and was the son of the late, William Albert McPeake and Addie Gertrude Flowers McPeake. He spent his boyhood years on the farm. He first started getting into music at the age of six or seven. His father bought him his first guitar in 1936. In the forties, he was playing steel guitar with "The Rhodes Brothers" and had a weekly radio broadcast over WTJS Radio in Jackson, Tennessee. Around 1950, during the Korean War, is when he really switched to the banjo full time. One of the first groups that Curtis started was "Curtis McPeake and the Rocky Valley Boys" which aired six days a week over WDXL in Lexington, Tennessee. It was around 1952 or 1953 when he first met Earl Scruggs, and even appeared on some of the "Lester Flatt & Earl Scruggs" TV shows. Around Christmas 1955, Earl Scruggs was seriously injured in an automobile accident and Curtis was called to stand in for him with Lester Flatt. This was considered by Curtis to become one of his first big breaks into the music field. He continued on many occasions to fill in for Earl up until 1968 just before Lester & Earl went through their break-up in early 1969. He obtained his first recording contract with ABC Paramount in 1961 and has recorded for several other companies throughout his career. Curtis played with Bill Monroe for about two years, during the time when Bill played Carnegie Hall in November 1961. Curtis also recorded some eighteen classic songs with Bill. After leaving Bill Monroe and the Bluegrass Boys, he joined Wilma Lee & Stoney Cooper and worked throughout 1963 with them. After this stint, Curtis signed on with WSM as a staff musician and played the Grand Old Opry for several years. He became the only banjo player to ever be a member of the Grand Old Opry house band and he was also an in-demand session musician. During 1969, Curtis met Danny Davis and was invited to join him with the "Danny Davis and the Nashville Brass" and toured around the world with them until 1987. Later he took charge of a group called the "Natchez Grass" which shortly changed its name to "Natchez Express". Curtis has worked throughout his career with several major artists including George Jones and Melba Montgomery. He was the 2010 recipient of the Uncle Dave Macon Days Trailblazer Award and the 2018 recipient of the International Bluegrass Music Association’s Distinguished Achievement Award. Curtis has also been involved with the music industry as a collector of fine vintage banjo's and various acoustic instruments and is in constant demand in authenticating and appraising fine vintage banjo's and various instruments. He was a 50 year member of the American Federation of Musicians, a 50 year member of the Masons and a 50 year member of Al Menah Shrine Temple. In addition to his parents, Curtis was preceded in death by his sister, Alma McPeake in 1933 and his brother, Hoover McPeake in 2019. He is survived by his wife of 72 years, Wilma Dean Western McPeake; daughter Towanna McPeake-Coward; son-n-law – Wayne T. Coward and granddaughters, Connor Michelle Coward and Carson Elayna Coward. Funeral services will be conducted 11 a.m. Thursday, February 25, 2021 at Bond Memorial Chapel, 1098 Weston Drive, Mt. Juliet, TN with Bro. Danny Tomlinson officiating. Visitation will be 4-8 p.m. Wednesday and one hour prior to service time Thursday. For those who plan to attend, please wear a mask and follow social distancing guidelines. The service will be live streamed on the Bond Memorial Chapel Facebook page. Additional funeral services will be conducted 11 a.m. Saturday, February 27, 2021 at Pafford Funeral Home, 10145 Hwy 100, Scotts Hill, TN. Visitation will be 4-8 p.m. Friday and one hour prior to service time Saturday. Interment will follow at Crowell Chapel Cemetery in Middleburg, TN. Arrangements by Bond Memorial Chapel, N. Mt. Juliet Road and Weston Drive, Mt. Juliet, TN. (615) 773-2663. www.bondmemorial.com and Pafford Funeral Home, 10145 Hwy. 100 Scotts Hill, TN. (731) 549-3151 www.paffordfuneralhome.com

The family of William Curtis McPeake created this Life Tributes page to make it easy to share your memories.

Send flowers to the McPeake family.