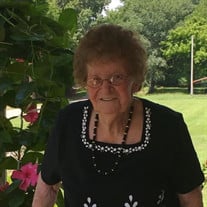 Mrs. Virginia Grimsley Rogers, age 96, passed away on Friday in Henderson. She was born July 21, 1924 in Decatur County to the late Charlie and Cora Powers Grimsley. She was a member of Judson Baptist Church and a homemaker. She enjoyed gardening,... View Obituary & Service Information

The family of Virginia Grimsley Rogers created this Life Tributes page to make it easy to share your memories.

Send flowers to the Rogers family.