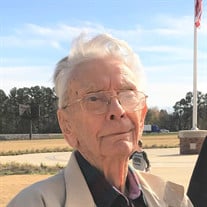 Mr. Vernon G. Doll, formerly of Mattoon, Coles County, Illinois, passed away Thursday, September 5, 2019 in Jackson, Tennessee at the age of 101. He was born March 20, 1918 at home, south of Windsor, Shelby County, Illinois. He was the son of Carl L. Doll and Lydia (Mueller) Doll. Services will be held at the Tennessee State Veterans Cemetery at Parkers Crossroads, Friday, September 13, 2019 at 9:45 a.m. His wife, Hope will also be interred with her husband at this time. He attended Gaskill church early in life and through eighth grade at Lone Elm School. He graduated Neoga, Illinois High School. He worked on the family farm until his parents moved to Princeton, Bureau County, Illinois in 1936. He stayed at his grandparent’s home in Trowbridge, Shelby County, Illinois, while finishing high school, working for his uncle until February 23, 1942 when he was inducted into military service. He went to Keystone Rodes (code) school in Pittsburg, Pennsylvania in mid 1942. From there he went to Alaska, serving in Yakutat and Seward, Alaska until December 18, 1943 when he married Hope E. Bauer. He was then transferred with his wife to Drew Field, Tampa, Florida. Their next move was to Alexandria, Louisiana, Army Air Force Base where he was discharged October 30, 1945, a WWII veteran. In the spring of 1945 they made their home in Mattoon, Coles County, Illinois. A son, Keith was born August 09, 1952. Mr. Doll worked for Warner’s Office Equipment Co., retiring in 1980 to travel and enjoy life with Hope. Vernon traveled to Mexico, Alaska, Hawaii, Australia, New Zealand, Kenya, Africa; Europe including England, Wales, Scotland, the Holy Land and other countries. In the fall of 2008, he and Hope moved to Tennessee to be near family. He is survived by Keith (Kathy), of Lexington, grandchildren Bill Doll (Jackie) of Lexington, Tennessee, Tisha Doll of Chattanooga, Tennessee and great-grandson Luke Doll of Lexington, Tennessee. Vernon was a member of the First United Methodist Church in Mattoon, Illinois until moving to Tennessee. After moving to Tennessee he became a member of the Lexington Christian Church. He was preceded in death by his loving wife of nearly 70 years, his parents and three brothers, Harold, Ben and Lawrence. In lieu of flowers, please make memorial donations to the Lexington Christian Church in Vernon’s name.

Mr. Vernon G. Doll, formerly of Mattoon, Coles County, Illinois, passed away Thursday, September 5, 2019 in Jackson, Tennessee at the age of 101. He was born March 20, 1918 at home, south of Windsor, Shelby County, Illinois. He was the son of... View Obituary & Service Information

The family of Mr. Vernon G. Doll created this Life Tributes page to make it easy to share your memories.

Send flowers to the Doll family.