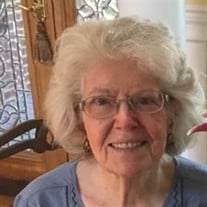 It is said that a teacher, “takes a hand, opens a mind and touches a heart.” And Mrs. Valeda Wilson did just that for over forty-three years, touching thousands in the process. Sadly, Mrs. Valeda died early Sunday morning, August 8, 2021 in Lenoir City at the home of her daughter. She was born to the late Valous and Elaine Laws Bush on April the 20th, 1928 in Henderson County where she spent almost her entire life. Mrs. Wilson’s purpose in life was to teach and she began that journey at the age of nineteen teaching at a one room schoolhouse. She continued her education during this time, beginning at David Lipscomb in Nashville and finishing her Bachelor’s degree at Bethel University and later receiving her Master’s at Memphis State. She was also honored to serve as a State President of the Omicron Chapter of the Delta Kappa Gamma. Almost her entire teaching career of forty-three years was as a 1st grade teacher at Caywood Elementary in Lexington. She had many loves of course: her family and especially the grand and great grandchildren, her love of reading and her love of travel. Books were her outlet, always reading, immersing herself in the subject. Her late husband of sixty years, James, was a fifty-nine year TSSAA basketball official. During many of the games she attended, you would find Mrs. Valeda sitting quietly reading, oblivious to the crowd, turning page after page as she was reading. Reading also transitioned to her being a faithful member of the Broad Street Church of Christ and she read the Bible many times, with the book of Psalms being her favorite. In Lexington she a member of the Book Club that still exists today. She leaves behind her daughters: Jacqueline (Jay) Langston of Lewisburg, Jill (David) Montgomery of Knoxville and Joy Lowrance of Lenoir City; and sons: Jim (Susan) Wilson of Lewisburg and Mickey Wilson of Murray, Kentucky; and a brother, Denton (Murel) Bush of Cedar Grove. The eleven grandchildren that brought her so many great memories are: Jay (Rene), Matt (April). Rob (Amy) and Casey (Susie) Lowrance, Luke and Wil Langston, Maddie (Andy) Johnson, Katie (Harley) Miller, Emily (Rob) Smithson, Hallie (Eric) Mossack and Becca (Kevin) Warner. Also surviving Mrs. Valeda are twenty-two great grandchildren and numerous nieces and nephews. In addition to her parents and husband, she is preceded in death by her sister, Danny Joy Bush McKee, one grandchild, Wilson Langston, two great grandchildren, Betsy and Parker Lowrance, and two nieces, Bonita McKee and Pam McKee Rosenbury. Graveside services for Mrs. Valeda Wilson will be 1:00 PM Wednesday, August the 11th at Henderson County Memory Gardens in Lexington with Pafford Funeral Home in charge of the arrangements.

It is said that a teacher, &#8220;takes a hand, opens a mind and touches a heart.&#8221; And Mrs. Valeda Wilson did just that for over forty-three years, touching thousands in the process. Sadly, Mrs. Valeda died early Sunday morning, August... View Obituary & Service Information

The family of Valeda Bush Wilson created this Life Tributes page to make it easy to share your memories.

It is said that a teacher, “takes a hand, opens a mind and touches...

Send flowers to the Wilson family.