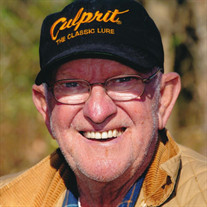 A life well lived could best describe the life of Romney “Buck” Myracle. One of seven children to the late Alton and Nellie Roberts Myracle, “Buck” as he would be called, was born on Monday, January 18th, 1932 and passed away at the age of 88 on Monday, August 10th, 2020 in Martin, Tennessee. “Buck” married his wife of seventy-one years, Shirley Milam Myracle, at the early age of 17 and have shared life experiences ever since. Like many from the South, in the 1950’s the two of them left home and relocated up North following jobs being offered. “Buck” joined the workforce at General Motors in Willow Springs, Illinois. He was known as the “Gadget Man” because he could fix anything. After thirty years of loyal service, he retired and quickly moved he and Shirley back “home” to the Huron area of Henderson County. “Buck” had many hobbies that included hunting, fishing, drag racing, and growing tomatoes. As a young man drag racing, he won many events with his car “Just Plain Buck”. Hunting, he loved watching his bird dogs working a field, and then going on point. Buck’s first love was fishing, and two of his favorite fishing buddies were his wife Shirley and his grandson Bill. Buck and Shirley would fish five days a week and she said he could always out-fish her (although that wasn’t always true). On Saturday they did chores, and on Sunday they went to church and watched NASCAR (always rooting for a Chevy). He attended Sand Ridge Baptist Church and loved to “’pick on” his pastor, Bro. Marty, whom he thought was the best, except that he drove a Ford! “Buck” was loyal to the end to GM. He is survived by his wife, Shirley Milam Myracle, a daughter, Rosemary Harris (Don); grandchildren, Bill Lambert (Dawn), Jennifer Lambert and Aaron Lambert; great-grandsons Alexander and Austin “A.J.” Lambert; a sister, Martha Blaine (Ed). Preceding “Buck” in death were his parents, Alton and Nellie Roberts Myracle; his siblings Alton Myracle Jr., Louise Normand, Jewel Harris, Janell Thomas and Jean Gross; his son, Billy Roy Myracle; and infant daughter, Sarah Jane Myracle. Graveside services will be 2:00 PM, Saturday, August 15th at Hare Cemetery with Pafford Funeral Home in charge of arrangements. The Myracle family asks that all friends and family wear masks and social distance for everyone’s safety. Mr. “Buck” Myracle had a lot of words of wisdom: “Oil is cheap, engines are expensive,” “The color of the lure doesn’t matter,” and “If it was easy, someone would have beat you to it.”

The family of Mr. Romney "Buck" Myracle created this Life Tributes page to make it easy to share your memories.

A life well lived could best describe the life of Romney “Buck”...

Send flowers to the Myracle family.