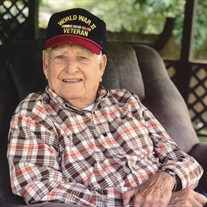 Leaving your mark on the world can be challenging for most individuals. And for others, it comes easier. For Robert Paul Roberts, it was the latter, he was a master brick and stone mason, retiring at the age of 80, and you can still see his works all over West Tennessee in homes, churches, schools and retail businesses. Mr. Paul learned his trade when he returned home after proudly serving his country in the Army during World War II. Mr. Paul Roberts was born on Tuesday, August 22, 1922 in Henderson County, one of five children to the late John Duncan and Cora Mae Blankenship Roberts. He was a lifelong resident of Henderson County, a friend to everyone who knew him and a faithful member of the Mazies Chapel Missionary Baptist Church. He died peacefully at his home on Wednesday afternoon, July the 1st, 2020 at the age of 97. When you ask his friends and acquaintances to describe Mr. Paul, you’ll hear comments like, “friend to all”, “kindest man you’ll ever meet”, “always positive, his glass was always half full”, “great husband, dad and grandfather”. He was just that person. Mr. Roberts was a part of the greatest generation, a decorated veteran, and took great pride in serving in the Army during World War II. He was in college at the University of Tennessee at Martin when war broke out and soon after joined a large group of local men from Henderson County who enlisted, shipped out and served together. He served in Holland, Belgium and Germany earning service medals and a Bronze Star. Equally important to Mr. Paul was his family who affectionately called him either “Poppy” or “Big Daddy”. Survivors include his wife of thirty years, Betty Wood Roberts, his children: Paula Roberts (Jimmy) White, Robin (Jan) Roberts, Charles (Gail) Roberts, Bob (Becky) Roberts, Tim Ellis, Margo Ellis Bass, Donna (Bobby) Tate ,Krista Ellis and Peyton Ellis; grandchildren: Jerrod (Stephanie) Cagle, Julia (Stephen) Stanfill, Robert (Ashely) Roberts, Ryan (Ashley) Roberts, Tabitha (Neal) Wuoo, Tenille (Greg) Grobmeyer, Tera (Jeremy) Duke, Kelsey (Dustin) Inman, Tristan (Bianca) Roberts, Colin and Luke Roberts, Will and Katie Tate, Mallory (Joe) Bridges, Stephanie Barrells and Kaley Ellis; and 26 great grandchildren. Preceding Mr. Paul in death were his brothers: James, John L. and Willie Howard Roberts and his sister, Elizabeth “Sugar” Weatherly. Funeral services will be held at 1:00 PM Friday, July the 3rd at Mazies Chapel Missionary Baptist Church and interment to follow at Hare Cemetery with military honors. Pafford Funeral Home is in charge of arrangements. Casket bearers will be: James Lindsey, David Overman, Glenn Melton, Randall Roberts, Virgil Overman, Kenneth Anderson, Bob Roberts and Thomas Blankenship.

Leaving your mark on the world can be challenging for most individuals. And for others, it comes easier. For Robert Paul Roberts, it was the latter, he was a master brick and stone mason, retiring at the age of 80, and you can still see his... View Obituary & Service Information

The family of Robert Paul Roberts created this Life Tributes page to make it easy to share your memories.

Leaving your mark on the world can be challenging for most individuals....

Send flowers to the Roberts family.