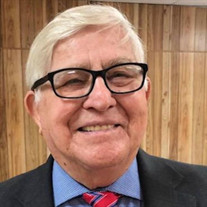 Called to Serve … “And I will give you pastors according to mine heart, which shall feed you with knowledge and understanding.” Jeremiah 3:15 Rev. Clifford T. Stone received this calling as a young man when he was just 24 years old to “come back to Tennessee” while working in the automobile industry in Chicago, Illinois. And now after serving the Lord for over sixty-five years, he was called to his eternal home. Rev. Stone died at the age of 90 in Lexington on the 7th of September, 2021. Bro. Clifford Stone, the youngest of ten children, was born in Henderson County on September 16th, 1930 to the late Joseph Wesley and Magie Blackstock Stone. In Chicago he received his calling and with the guidance of his mentor, W. R. Daniel, he left for Tennessee as an ordained minister. Once back home in 1955, he started Stone Hill Pentecostal church where he pastored for over thirty years. Afterwards he pastored at Stringtown Pentecostal Church for ten years and then started his second church, Mission of Christ Church. Bro. Stone’s life centered on helping others through his ministry. Whether it was holding revivals, pastoring churches, celebrating weddings or officiating funerals, he served while holding a full time job and eventually retiring from Johnson Controls in Lexington. “Come on” was one of Bro. Stone’s favorite expressions and he used it frequently. He played golf with his son up to his death and when asked during all of these years if he wanted to go and play, his response was simply “come on”. He had a strong sense of family and always loved a family get together, and again, “come on” was heard a lot. It was also fitting that Bro. Stone taught all of his children how to play musical instruments, piano, mandolin or guitar and music was always enjoyed as a family. In fact, the songs at his funeral Friday will be recordings of some of their families singing. He was married to the late Bobbie Jo Young Stone who died in 2000 for fifty-one years and they had four children. After her death he later married the late Dossie Nan Coleman Stone spending fourteen years together. Bro. Stone is survived by his daughters: Treccia (David) Haney and Charolette (Don) Seeley; his two sons: Rev. Stanley (Sarah) Stone and Michael (Sylvia) Stone; a sister, Inus Martin; 8 grandchildren, 17 great grandchildren and 6 great great grandchildren. Funeral services will be held outdoors at the first church he established, paying homage where he started his preaching at a brush arbor at today’s Stone Hill Pentecostal Church. Services will be at 2:00 pm Friday, September 10 and burial will follow in the church cemetery with Pafford Funeral Home of Lexington in charge of the arrangements. The Stone family will receive friends at the funeral home in Lexington on Thursday from 5-8 pm.

Called to Serve &#8230; &#8220;And I will give you pastors according to mine heart, which shall feed you with knowledge and understanding.&#8221; Jeremiah 3:15 Rev. Clifford T. Stone received this calling as a young man when he was just... View Obituary & Service Information

The family of Rev. Clifford Stone created this Life Tributes page to make it easy to share your memories.

Called to Serve … “And I will give you pastors according to mine...

Send flowers to the Stone family.