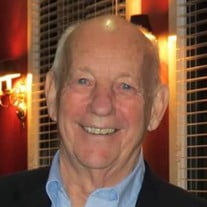 Philip V. Fisher ("Phil"), 86, died Saturday, December 21, 2019, at Vanderbilt University Medical Center in Nashville, Tennessee, following a brief illness. He leaves behind his beloved wife, Karyl, his five daughters, Kari (Richard) Merk, Kelly (Martin) Katz, Kristy (Matt) Powell, Jennifer (Lee) Lewis, Amanda (Flynn) Jowers, his son Michael (Alaina) Fisher, and ten grandchildren: Nick, Kiley, Zach, Madelyn, Broox, Jake, Aliya, Eli, Fisher, and Avery. Phil was born and raised in Robinson, Illinois, the son of Vernon and Thelma Fisher, who preceded him in death. He was also preceded in death by his sister, Karol Fisher, and grandchildren Carter, Clara, Cora, and Baby Lewis. In his early years, Phil would help out at the family's business, Fisher's Tavern, where he made lifelong memories. He graduated from Eastern Illinois University and shortly thereafter, he served in the U.S. Navy aboard the USS Douglas A. Munro. After his service, he joined the Illinois Bureau of Investigation. He later joined the Drug Enforcement Administration as a federal agent in 1966 and served in Chicago, Illinois, and Washington, D.C. Phil met his wife, Karyl, who also worked for the DEA in Chicago, and they married on November 27, 1979. Phil was appointed as the Special Agent in Charge of the Chicago Field Office, and retired in 1988. He was a remarkable Agent and a fearless leader. After retiring from the DEA, Phil served as the first Inspector General for the Illinois Department of Human Services from 1988 to 1991. Phil and Karyl then helped form a private investigation firm, where they worked for a few years before moving to Lexington, Tennessee, in 1993. Phil was a true gentleman, who loved spending time with his family most of all. He was a loving husband and an adoring Papa. He made all of his children and grandchildren feel like "the favorite". Phil told great stories and even better jokes. He loved to read, sing bass in the choir, and write poems. To know Phil was to love him. He will be missed by all but he will live on in our hearts forever. "There are some who bring a light so great to the world that even after they have gone, the light remains." Funeral services are scheduled for 12 PM, December 27, 2019, at the First United Methodist Church in Lexington, Tennessee, with burial at the Tennessee State Veterans Cemetery at Parkers Crossroads, with full military honors. In lieu of flowers the family ask contributions be made to the First United Methodist Church of Lexington, Tennessee.

The family of Mr. Phil Fisher created this Life Tributes page to make it easy to share your memories.

Send flowers to the Fisher family.