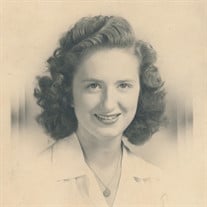 Arma Maxileen Goff Dill, 93, died the Tuesday, September 17, 2019, at the home of her daughter and son-in-law (Jack and Phyllis Dill Vanderpool), with her family at her side. She leaves her daughter Donna (Jimmy) Dickens, of Portland, TN; daughter Phyllis (Jack) Vanderpool of Spring City, TN; Son Donald (Ed) Dill, Jr. of Macon, GA; daughter Carol (Charlie) Boatman, of Louisville, KY; six grandchildren and nine great grandchildren and five great-great grandchildren; sister-in-law Betty Dill; and numerous nieces, nephews and cousins. Maxileen was the wife of Donald Edward Dill, who passed away April 16th, 2019, also at the home of their daughter and son-in-law. She was predeceased by her parents, Dr. Jesse Franklin Goff and Jewell Dennison Goff of Henderson County, TN and her brother, Richard Dennison Goff of Henderson County, TN. After high school, Maxileen studied business at Sullins College in Bristol, VA. After college, she returned to Jackson, TN and worked as a secretary for an attorney. On September 7, 1947, she married Donald Edward Dill. Don and Maxileen enjoyed 71 years of marriage before he passed away in the Spring. After they married, they moved to Nashville and began a family. After Donna was born, Maxileen became a stay at home mother, focusing on caring for her husband and guiding her children through every stage of life. Don and Maxileen both loved to cook and were the head chefs of the family gatherings. She loved to paint, had a green thumb and always had a craft ready for her visiting grandchildren. She was an active member of her church and a regular volunteer at school and the library, when the children were young. After the children were grown, Maxileen enjoyed playing bridge with her friends and was an integral participant in the “50 Year Club”, which arranged all of their high school reunions. In lieu of flowers, we request a donation to the American Cancer Society, First Baptist Church of Lexington, TN or your favorite charity. Graveside services are scheduled for 12 PM, Saturday, September 21, 2019 at Lexington Cemetery.

Arma Maxileen Goff Dill, 93, died the Tuesday, September 17, 2019, at the home of her daughter and son-in-law (Jack and Phyllis Dill Vanderpool), with her family at her side. She leaves her daughter Donna (Jimmy) Dickens, of Portland, TN; daughter... View Obituary & Service Information

The family of Mrs. Maxileen Goff Dill created this Life Tributes page to make it easy to share your memories.

Send flowers to the Dill family.