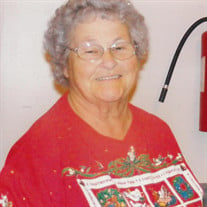 Funeral services for Mrs. Mary Gossett, age 86, are scheduled for 10 AM, Friday, June 5, 2020 in the chapel of Pafford Funeral Home. Interment will follow in Parkers Crossroads Cemetery. Mrs. Gossett passed away on Monday in Lexington. She... View Obituary & Service Information

The family of Mrs. Mary Elizabeth Wood Gossett created this Life Tributes page to make it easy to share your memories.

Send flowers to the Gossett family.