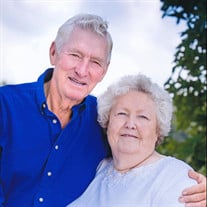 On Wednesday, August 4, 2021, Margaret O’Nell Hayes of Sardis passed away at the age of 90. Nell was born on May 29, 1931 in Medina, TN to Ambrose and Jessie Grissom. On December 26, 1950, she married Herbert Edward Hayes, and together they raised five children. Nell was a world-class wife and homemaker who made it her priority to care for her husband and her family. There has never been a woman more dedicated to such. One never needed to look long to find her, for she was almost always to be found at one of three places – in the kitchen, at the grocery store, or at church. To her husband, Nell was a steadfast helpmate and friend. To her children, “Momma” was a strong example of how to love the Lord and serve others. To her grandchildren and great grandchildren, “Granny” was the queen of hall carpet matchbox cars, the one who made sure the Easter eggs were stuffed with chocolate and quarters instead of nickels and Starburst, the provider of sugar in various forms, the best giver of hugs, a compassionate listening ear, and a gentle advisor. To all, her life observed was a course in selflessness, service, and faith. Nell was preceded in death by both her parents and all her siblings. She is survived by her husband, Herbert; her five children, Mike Hayes (Carolyn), Steve Hayes (Alexia), Caron Snider (Jackie), Bruce Hayes (Anesia), and Randy Hayes (Tammy); eleven grandchildren, Scott Hayes (Erin), Heather Foster (David), Adam Snider (Kendall), Hunter Hayes (Maggie), Miranda Guy (Alex), Garrett Hayes (Lexi), Caleb Snider, Kaitlyn Hayes, Kallie Hayes, Kamden Hayes, and Cooper Hayes; and eleven great grandchildren, Alex Foster, Connor Foster, Alayna Hayes, Weston Hayes, Meredith Hayes, Harper Foster, Gideon Snider, Myrah Hayes, Margaret Guy, Elizabeth Snider, and Hazel Hayes. All of them will miss her more than words can express. A small graveside service will be held on Saturday, August 7th, 2021 at 10 AM at the Hayes Family Gravesite at 1320 Jack Little Rd Sardis, TN 38371 to honor her life. The family is not encouraging public attendance due to family currently having Covid, but if you are attending please do not approach the family or come near the tent. In lieu of flowers, the family requests donations be made to Wounded Warrior Project (support.woundedwarriorproject.org) or Gideons International Bible Distribution (sendtheword.org) in memory of Mrs. Nell.

The family of Mrs. Margaret O'Nell Hayes created this Life Tributes page to make it easy to share your memories.

Send flowers to the Hayes family.