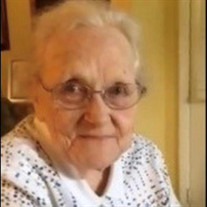 Funeral services for Mrs. Lyndel “MamaLyn” Tate Rhodes will be held Wednesday, July 1 at 3:00 o’clock at the new First Pentecostal Church located on West Church Street in Lexington where she was a longtime member. Bro. Bobby and Bro. David Beecham will officiate her services and interment will follow at Sand Ridge Cemetery in Henderson County. The friends are asked to wear masks and respect social distancing guidelines. Born on February 20th of 1924, one of five children to McKinley and Ruby Wood Tate, Mrs. Rhodes was a lifelong resident of Henderson County. Interesting facts about Mrs. Lyndel, in her 96 years, she only left Tennessee twice and only drove a car, one time, and that was just for a distance less than a mile! Mrs. Rhodes worked at Salant and Salant from the early 1950’s until 1969 and then became a baby sitter for many different children over the years as they were growing up. Music and song have always been a part of Mrs. Lyndel’s life, starting when she was just nine years old, becoming a part of the Sand Ridge Harmonica Band, a group that was formed to teach the harmonica to its members. This was a talent that she enjoyed for the rest of her life. In fact, just three weeks ago when she was admitted to an assisted care facility, she played the harmonica for them as well as the other residents. In addition to the harmonica, she taught herself how to play the guitar, piano, autoharp and even the fiddle. Making music was woven into her soul, writing everything from poems to songs. In 2005, on the way back to her home after visiting her son, Buddy in middle Tennessee, she penned the words to “Little House on the Hill” which described her homeplace. In 2017 this song was recorded by Willie Nelson on his God’s Problem Child album, an amazing achievement by a 92-year-old great grandmother at the time! This song and other harmonica songs of hers will be played at her funeral on Wednesday. Family was important to Mrs. Lyndel and she was blessed to be a part of multiple generations. Survivors include her sons: Tim D. (Mary Ann) Rhodes of Lexington and Buddy (Billie) Cannon of Goodletsville; daughters: Kim (Tim) Bishop of Jackson, Judy (Larry) Vise of Lexington and Brenda Joan Glaser of Indianapolis, IN; a brother, Morris Tate Sr. of Bartlett and a sister, Jackie Anderson of Lexington; there are 12 grandchildren, 18 great grandchildren and 4 great great grandchildren. Preceding Mrs. Rhodes in her death was her husband, Orville “Ikey” Rhodes, and brothers, Ben and Dalton Tate. And if you knew Mrs. Lyndel or have seen her on YouTube playing one of her many songs, you’ll know that she has a unique way of finishing. It’s just three words and a great way to end her story as well, “Show’s Over Folks”.

Funeral services for Mrs. Lyndel &#8220;MamaLyn&#8221; Tate Rhodes will be held Wednesday, July 1 at 3:00 o&#8217;clock at the new First Pentecostal Church located on West Church Street in Lexington where she was a longtime member. Bro. Bobby... View Obituary & Service Information

The family of Mrs. Lyndel "MamaLyn" Tate Rhodes created this Life Tributes page to make it easy to share your memories.

Funeral services for Mrs. Lyndel “MamaLyn” Tate Rhodes will be...