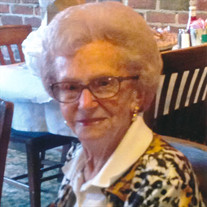 In the dynamics of every family there are different roles for different family members and there is always someone who assumes the leadership responsibilities and guides everyone through the years. In the case of the Helms’ family, Mrs. Juanita Parsons Helms, assumed that role in 1983 after the death of her husband Max Helms. And for the next thirty-six years, Mrs. Helms did just that, instilling a strong sense of family in the process. On Tuesday evening, April 9, 2019, the Helms family suffered the loss of Juanita Parsons Helms, at the age of 95. She was born in the Middleburg community on June 22, 1923 to the late Cleff and Myrtle White Parsons. Mrs. Helms led a full, rewarding life and it always revolved around her family. In her younger years, the high school years, she excelled at basketball while attending Lexington High School where she graduated in 1941. After her marriage to Max Helms, she and her husband started Candy Meadow Farm in 1952 and in 1963 founded Helms Motor Company where she worked for a number of years alongside her three sons at the dealership and farm. Both of these endeavors have withstood the test of time and are still successes to this day. Her church, First Baptist of Lexington, was very important to her and she was a long time, faithful member. Mrs. Helms took pride in many things throughout her life, her family though was at the top. In her latter years, she would comment that her great grandchildren were always her best medicine. In addition to her family, she enjoyed staying up to date with her sports, especially the University of Tennessee sports programs and St. Louis Cardinal’s baseball. Mrs. Helms is survived by her sons: Steve Helms and his wife Becky and Rob Helms and his wife Pam, and a daughter in law, Pat Helms. There are six grandchildren: Candy (Mitch) Hayes, Brandi Phillips, Holli (Jody) Buck, Heath (Meghan) Helms, Michael Robinson and Hayden Helms; five great grandchildren: Trae Townsend, Ethan and Max Phillips, Hollis Helms and Walt Buck. Besides her parents she was preceded in death by her husband, Max Helms; her daughter, Candy Helms, her son, Randy Helms and her brother Joe Parsons. Funeral services for Mrs. Helms are scheduled for 1:00 PM Friday, April 12th in the chapel of Pafford Funeral Home with Dr. Hoyt Wilson and Dr. Clay Hallmark officiating. Interment will follow at the Helms Family Cemetery, located at Candy Meadow Farm, near Lexington. Serving as pallbearers will be: Heath and Hayden Helms, Trae Townsend, Max and Ethan Phillips, Michael Robinson, Mitch Hayes, Jody Buck and Jason Hart. Hollis Helms and Walt Buck will serve as Honorary Pallbearers. The family of Juanita Helms has asked, in lieu of flowers, that memorials be directed to the First Baptist Church or First United Methodist Church or the charity of your choice.

In the dynamics of every family there are different roles for different family members and there is always someone who assumes the leadership responsibilities and guides everyone through the years. In the case of the Helms&#8217; family, Mrs.... View Obituary & Service Information

The family of Mrs. Juanita Parsons Helms created this Life Tributes page to make it easy to share your memories.

In the dynamics of every family there are different roles for...

Send flowers to the Helms family.