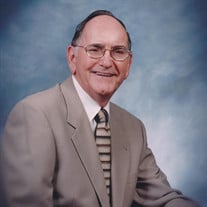 Funeral services for John King Meadows, age 89, will be held at 2 PM, October 15, 2020 in the chapel of Pafford Funeral Home with Dr. Hoyt Wilson officiating. Burial will follow in Lexington Cemetery. Mr. Meadows died Tuesday, October 13, 2020 at his home in Lexington after a short illness. He was raised in the Middle Fork Community until he left home to join the military. After graduating high school in 1950, Mr. Meadows joined the U. S. Air Force and served in the Korean War. While in Korea, he had to have top secret clearance in order to work on a mission to determine if Russia was making an atomic bomb. On June 15, 1951, he married his high school sweetheart, Tommie Faye Teague. She was the love of his life. They had nearly 54 wonderful years together. After the service, Mr. Meadows attended Union University, graduating with a degree in business. He worked for the Milan Arsenal for 32 years as a purchasing agent and time study engineer. He was a member of First Baptist Church, where he was a member of the Jack Hay Sunday School class for 65 years. He was also a member of the Lexington Lions Club for 60 years. He belonged to VFW Post 1294 and American Legion Post 7, as well as Woodmen of the World Lodge 49. If you knew anything about John King, you knew he loved his country and politics. He truly believed in helping others and those less fortunate. He came from a long line of Democrats. He is now the last of the Yellow Dog Democrats. In his later years, he had an everyday ritual of going to drink coffee at McDonalds with his buddies. Next he would go to Walmart to get his walking done, then on to the courthouse to say “Hi” to everyone. He loved being around people. His last stop would be his daughter’s house to let her know he had made it another day. He was preceded in death by his wife, Tommie Faye Meadows, his parents, Howard and Angeline Meadows, and his brother Howard Jr. (Blackie) Meadows. John is survived by his daughter, Lisa Hester of Lexington, his brother-in-law, Glynn Teague of Lexington, and his nephew Ron Meadows (Jackie) of Mt. Juliet and other great nieces and nephews. He is also survived by a special cousin, Peggy Britt Bateman. In addition to his family members, he is survived by a special friend, Carolyn Farmer. The family requests memorials to be made to First Baptist Church of Lexington or to the Carl Perkins Child Abuse Center of Lexington. The family will receive friends on Thursday from 9:30AM until time of service. The family requests that you wear a mask to visitation and the funeral.

The family of Mr. John King Meadows created this Life Tributes page to make it easy to share your memories.

Funeral services for John King Meadows, age 89, will be held...

Send flowers to the Meadows family.