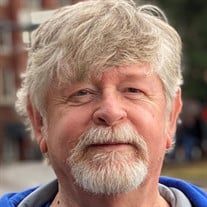 It is with shattered hearts we announce that Gary Durward Denley (G), age 68, passed away January 23, 2021, in Birmingham, AL. He was born November 5, 1952, in Millington, TN. He is preceded in death by his parents Oonna (Ma) and Durward (Pa) Denley, and recently his 16-year-old beloved Siamese cat, Kahn. He is survived by wife, Lisa Renea; sons, Duane Denley (Courtney) and Dakota Rogers (Felicia); daughters, Dana Denley and Melissa Alexander (Stacy); seven grandchildren; baby sister, Ellen Bingham (Dennis); “other” brother, Randy Denley (Kathy); favorite aunts, Ida Mae Jones and Shirley Jones; nephews, Ryan Denley (Bree), Chris Denley, Jon Bingham (Allison), and Corey Bingham (Whitney). He also leaves behind a host of friends dating back to high school and Navy days, as well as his highway-rescued cat, BG. Gary always said he wanted to write his own obituary because no one would get it right. As you will read, he lived, loved, and experienced life for all it had to offer. Our words will never be able to capture his true essence or the impact he had on each one of our lives. Gary served in the United States Navy and full-time Tennessee Army National Guard- he often recounted tales of his adventures on ships, submarines, and tanks. He continually had a passion to learn new things. He earned his bachelor’s degree and various technical certifications throughout his education while attending JSCC, Ole Miss, UT Martin, and Fleming Training Center. He enjoyed many occupations over the years including working as a paperboy, police officer, deputy sheriff, truck driver, and field service representative for a data processing company. In 2003, he discovered his niche for water treatment. He obtained his Grade IV water treatment license and held positions in Lexington, TN, Alabaster, AL, Upton County, GA and lastly, Calera, AL. He truly enjoyed the work and the friends who became family. To quote a colleague of Gary’s, “His great attitude and optimism was contagious. We always said ‘if you’re having a bad day, call Gary!’” Gary was a self-taught guitarist, traveling everywhere with at least two guitars! He and his wife bonded and fell in love over music, later marrying at Graceland in Memphis, TN. Over the past two decades, he started every day with her by saying “let’s go have fun!” He often enjoyed the simple pleasures in life: picnics, books, movies, museums, sporting events, and live concerts. He loved talking about history and space events- often sharing and reciting facts in such detail, you felt he had experienced these events firsthand. He was a believer of Jesus. He believed in and was grateful for love- never missing a day of letting you know he loved you. At all times, he was thoughtful, asking how you were or how your day went. He was always full of happiness and laughter, often having a joke or a story that would cause you to fall to your knees laughing. He was a selfless individual who never put himself first. To Gary, no one was a stranger, they were a friend he hadn’t yet met. Through his support and unconditional love, Gary made us better people. Forever in our hearts, always our Superman. In lieu of flowers, please consider a donation to Frances H. Hensley Animal Shelter.

It is with shattered hearts we announce that Gary Durward Denley (G), age 68, passed away January 23, 2021, in Birmingham, AL. He was born November 5, 1952, in Millington, TN. He is preceded in death by his parents Oonna (Ma) and Durward (Pa)... View Obituary & Service Information

The family of Mr. Gary Durward Denley created this Life Tributes page to make it easy to share your memories.

It is with shattered hearts we announce that Gary Durward Denley...

Send flowers to the Denley family.