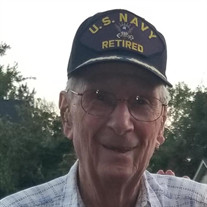 Lieutenant Commander Elton Lamar Gibbs, SC USN-Ret, fondly known as “The Commodore”, answered his final muster on February 27, 2022. The Commodore was born in Salem, Missouri on July 19, 1927, to the late Vernon Lamar Gibbs and Dorleskia Iown (Blackwell) Gibbs Meir. Elton enlisted in the Navy in 1945, and progressed through the ranks, receiving a commission as an Ensign in the Navy’s Supply Corps in 1964. He served honorably and with distinction in the World War II, Korean, and Viet Nam combat theaters. He retired in 1974, having attained rank of Lieutenant Commander with 29 years of service. Elton was a Life Member of the Military Officers Association of America, the Veterans of Foreign Wars, and USAA. He was also a Lifetime Emeritus member of Lexington’s “The Pines” golf course. His golfing buddies fondly referred to him as “The Commodore”. The Commodore settled in Lexington in the mid-1970s and quickly made friends, both in Lexington and on area golf courses – golf was a passion of his. Elton was preceded in death by his parents, his older brother, William Earl of Chicago, IL, his older sister, Emogene Wallace of Dolittle, MO, his lovely wife, Leitha – who lost her struggle with ovarian cancer in December of 2007, and his son, James L. Gibbs of Charleston, SC. He is survived by his sisters, Eunice Medlock of Festus, MO and Edna Kee of Mount Pleasant, SC; his daughter, Dianna Lee (Gibbs) McCaul; three grandchildren; eight great-grandchildren; and nine great-great grandchildren; as well as many friends in both Henderson and Madison counties. Graveside services for Elton Gibbs will be held at 2 PM, Wednesday, March 2, 2022 at Lexington Cemetery. He will be laid to rest beside his beloved Leitha. The family requests that contributions be made, in his name, to the Humboldt Military Home, in lieu of flowers. Pafford Funeral Home of Lexington is in charge of arrangements.

The family of Elton Lamar Gibbs created this Life Tributes page to make it easy to share your memories.

Send flowers to the Gibbs family.