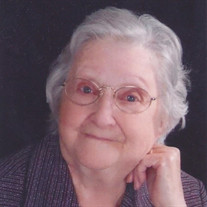 Edna Lee McCormick Dickson, age 90, passed away peacefully on April 1, 2019 at Westwood Health Care in Decaturville, TN surrounded by family. Edna was born on September 25, 1928 to William and Mattie McCormick. She attended Union Hill Baptist Church all of her life and was a member for 75 years. She dedicated her life to her family and loved to spend time in nature, gardening, tending her flowers, and birding. She loved cooking for her large family and spending time with her children and grandchildren. She was preceded in death by her husband of 40 years, John Boivin Dickson; one infant son; and one infant daughter. She was also preceded in death by three sisters, Axie Holmes, Gladys Johnson, and Madell Inman. She is survived by eight children, Barbara (Larry) Barker of Reagan, Donald (Patricia) Dickson of Reagan, Cathie (Joe) Hampton of Scotts Hill, Danny (Vicki) Dickson of Reagan, Boinita (Anthony) White of Jonesboro, Arkansas, Teresa (Joe) Ross of Sardis, Steve Dickson of Scotts Hill, and Randy Dickson of Reagan; twenty grandchildren; forty great grandchildren; and six great-great grandchildren. Funeral services are scheduled for 2 PM, Thursday, April 4, 2019 at Union Hill Baptist Church. Interment will follow in Union Hill Cemetery. The family would like to give special thanks to the staff at Westwood Health Care in Decaturville, Tennessee for all of their love and dedication. The family welcomes donations to The Alzheimer’s Association.

The family of Mrs. Edna Lee McCormick Dickson created this Life Tributes page to make it easy to share your memories.

Send flowers to the Dickson family.