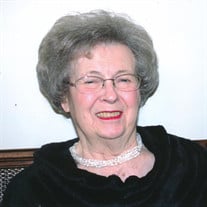 On Sunday, September 19, 2021, one week shy of her 90th birthday, Edalene Rhodes departed this life to be welcomed into her Heavenly home. She was born on September 26, 1931, in Henderson County, as the oldest child of the late Edward and Lura Jowers. After graduating Lexington High School, she married her classmate and sweetheart, Vernon Rhodes, on August 16, 1949. He passed away in 2009. She was also preceded in death by her brother Charles Edward Jowers and, most recently, her sister Margie Sue (Jowers) McFerrin. A wife, mother, and homemaker of the highest caliber, Edalene was also a hard-working professional for decades. She worked on the floor and in a supervisory capacity at Lexington’s Salant & Salant shirt factory in the 1950s and 60s. After its original partners started Rhodes Music Center in 1963, she and Vernon became its sole proprietors in 1964, leading to Edalene’s shift in full-time professional focus from Salant to the store by the end of 1966. From there, she facilitated the primary distribution point of music in Lexington for several years, hosted a hangout for our town’s music-lovers, and gave a proud few teenagers and young adults one of their first and/or best work experiences. In 1983, the store shifted focus from music sales to electronics by becoming Lexington’s first Curtis Mathis retailer. For most of those years, Edalene ran a Western Union office within the store. The Rhodes began the move toward retirement by selling the store in 1988. An involved member of her community for as long as she was able, Edalene was an active member of the Lexington FCE, Flower Lovers’ Garden Club, and Wooden of the World Fraternal Organization. She loved to paint, arrange flowers, and work outside, and she competed in and judged various Henderson County Fair events over the years. A member of Second Baptist Church since the early 1960s, Edalene taught Sunday School, played piano, and served in many ways to support those in and out of the church. Edalene loved her family generously and taught and served them well in many ways. She leaves behind her son Larry Rhodes; daughter Teresa and son-in-law Johnny Grimes; three grandsons – Dusty Grimes, Shane Rhodes, and Chuck Grimes; one great-grandson and three great-granddaughters. The Rhodes family has entrusted Pafford Funeral Home with her final arrangements, including visitation on September 20 from 5pm to 9pm and again on September 21 from Noon until the 2pm service in Pafford’s Chapel, which will be officiated by Bro. Jimmy Biggers and Bro. Miles Roberts. She will be buried beside her husband in the Henderson County Memory Gardens.

On Sunday, September 19, 2021, one week shy of her 90th birthday, Edalene Rhodes departed this life to be welcomed into her Heavenly home. She was born on September 26, 1931, in Henderson County, as the oldest child of the late... View Obituary & Service Information

The family of Ms. Edalene Jowers Rhodes created this Life Tributes page to make it easy to share your memories.

Send flowers to the Rhodes family.