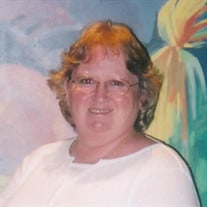 Mrs. Debbie Pratt, 65, of Huron, passed away on Wednesday, January 13, 2021, in Huntingdon. Mrs. Pratt was born December 19, 1955, in Lexington to Betty Lou Tomlin Stewart and the late Jr. Stewart. Mrs. Pratt was a homemaker, and always enjoyed taking care of and spending time with her family. She also enjoyed cooking, and loved her dog, Pig. Mrs. Pratt is survived by her husband of 48 years, Andy Pratt, and by her mother, Betty Stewart. She is also survived by two daughters, Lori Pratt and Sandy Pratt; sister, Amanda Stewart; two grandchildren, Tristen Pratt and Gretta Pratt; three nephews, Allan, Aaron, and Adam; niece, Sarah Beth. In addition to her father, Mrs. Pratt was preceded in death by two brothers, Keith Stewart and Tony Stewart, and by a niece, “Little Shelly.” All services will be private.

The family of Ms. Debbie Pratt created this Life Tributes page to make it easy to share your memories.

Mrs. Debbie Pratt, 65, of Huron, passed away on Wednesday, January...

Send flowers to the Pratt family.