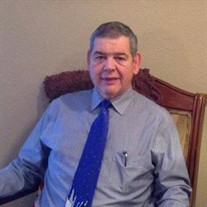 Funeral services for Mr. Danny J. Rhodes, age 70, are scheduled for 1:00pm on Saturday, December 28th, 2019 in the chapel of Pafford Funeral Home in Scotts Hill, TN. Interment will follow in Scotts Hill Cemetery of Pafford Funeral Home. Mr. Rhodes passed away on Tuesday, December 24th, 2019. He was born on April 21st, 1949 to Bill and Hula Mae Rhodes. Danny was a retired Captain from the Tennessee Army National Guard. He graduated Officer Candidate School class 17 where he would later return to instruct future officers. He served with the 230th Signal Battalion and the 30th CSSB both out of Humboldt, TN. He spent many hours as a volunteer with the Wounded Warrior Project. He was also a retired teacher with Decatur County School System. In his most recent years, Danny served as Mayor of Scotts Hill, TN and was an active Elder at the Scotts Hill Church of Christ. He was preceded in death by his parents, Bill and Hula Mae Rhodes and a brother, David Rhodes. He is survived by his wife of 52 years, Anita Rhodes, daughter Dana Musick (Charlie) of Waverly, TN, son Jarrod Rhodes (Misty) of Brownsville, TN, sister Penny Pope (Danny) of Scotts Hill, TN, and four grandchildren, Jacob Rhodes, Reagan Musick, Allison Musick, and Madison Rhodes.

The family of Mr. Danny Rhodes created this Life Tributes page to make it easy to share your memories.

Send flowers to the Rhodes family.