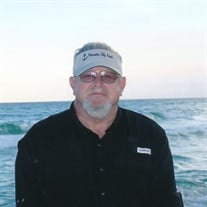 Vernon Dale Edwards, Jr. passed unexpectedly from this life on Wednesday, June 2, 2021. Dale was born on December 28th, 1950 to Vernon and Eva Mae (Jones) Edwards. He resided in McClemoresville with his family during his early years. He graduated from Huntingdon High School in 1969, enlisted in the Army in 1971, and was honorably discharged in 1974. Dale received the National Defense Service Medal during his service to our country. On Halloween evening, 1975, he went on a blind date that resulted in his marrying the love of his life, Frances Ellen Wood, a mere two months later on December 29th. Dale and Frances moved to Lexington at that time. They raised their daughters, Angie and Kim, in southern Henderson County and enjoyed 45 years of blessed marriage. As much as he loved raising his daughters, he was thrilled that the two of them gifted him with five grandsons. Some of his most joyous moments in his life were spending time helping raise and watching his grand-boys grow into wonderful young men. Dale attended vocational and technical schools throughout his working career and achieved several certificates in industrial maintenance. He was employed with Gould/Century Electric/Magnetek from 1976 to 1998 and Porter Cable/Black N Decker from 1998 until his retirement in 2011. Classic cars and guns were his passion. His first car was a black 1959 Ford Fairlane 500. Since that time, he owned two late 60 model mustangs, and a 1963 ½ model Ford Falcon. He loved riding his Harley, going to car shows, gun shows, and visiting pawn shops and flea markets. Dale also enjoyed travelling. In 2007, he chaperoned a Scotts Hill High School European excursion and visited London, Paris, Rome, Germany, Austria, and Switzerland. He and Frances also had the opportunity to go on an Alaskan cruise with other couple friends in 2001. Dale Edwards was a follower and believer in our Savior, Jesus Christ. He was a member of Shiloh Baptist Church. His fellow congregants listened on the Sunday prior his death as he gave his testimony. “If you do not know the Lord, PLEASE get down and pray and get yourself right with Him before it’s too late”. Vernon Dale Edwards, Jr. was preceded in death by his parents, Vernon and Eva Mae Edwards, and his brother-in-law Ricky Wade. He is survived by his daughters Angie Sipes (Jamie) and Kim Neisler (Jamie); five grandchildren, Drew Grice (Abby), Cody Sipes, Matt Grice, Andon Sipes, and Drake Neisler; one brother, Randy Edwards (Sandra); and two sisters, Wanda Wade and Patricia Powers. The family will receive visitors on Friday, June 4th, at Pafford Funeral Home from 2:00-9:00 pm and on Saturday, June 5th beginning at 10:00 am until the time of service. The memorial service will begin at 3:00 on Saturday with Brother Sammy McAdams officiating. A graveside service with military honors will follow at Lexington Cemetery.

Vernon Dale Edwards, Jr. passed unexpectedly from this life on Wednesday, June 2, 2021. Dale was born on December 28th, 1950 to Vernon and Eva Mae (Jones) Edwards. He resided in McClemoresville with his family during his early years. He... View Obituary & Service Information

The family of Mr. Dale Edwards created this Life Tributes page to make it easy to share your memories.

Vernon Dale Edwards, Jr. passed unexpectedly from this life on...

Send flowers to the Edwards family.