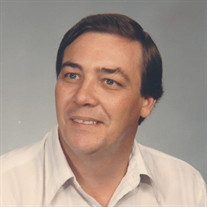 Bruce Washburn, avid car enthusiast, fisherman and accomplished storyteller went to be with our heavenly Father on Friday afternoon, March 26, 2021 in Lexington. When you think of Bruce many things come to mind, some he would tell you not to speak about. Most will remember Bruce as being a car/truck guy. He enjoyed all types of cars and trucks and traded frequently throughout his life. Bruce and his wife Pam spent some time trying to count how many automobiles they have had over the years and it is easily over 1000! Bruce was born on October 1st, 1950, a Sunday, to the late Stenson “Doc” and Eulala Glover Washburn in Henderson County. Living his entire life here, he made many friends and never encountered a stranger. You may have met Bruce when he was a county or city police officer with Lexington, where he retired after approximately twenty years of service. After leaving the police force, Bruce worked for sixteen years with Railway Claims Service here in Lexington where he had the opportunity to travel with his best friends and had numerous exciting adventures. These trips lead to many fun stories, lots of which he would tell while helping his friend at the local sporting goods store. But throughout Bruce’s life, cars and trucks were his passion. Whether it was doing mechanic or custom body work, trading for countless automobiles or participating and traveling for car shows, Bruce truly enjoyed his automobiles. In fact, shortly after Bruce married Pam, one of the local car salesmen told Pam, “if he trades wives like he does cars, you won’t be here six months”. Thankfully that wasn’t the case. Bruce and Pam have been married for forty-six years and Pam says it was never boring from one minute to the next and he was an amazing husband, father and friend. Surviving Bruce is his wife, Pam and their only child Olivia Washburn and her fiancé, Shane Hammons. Bruce is also survived by his son, Rusty and his wife Vicki Washburn (Detroit, MI); a brother, John (Regina) Washburn and a sister, Gina Stubblefield. Bruce was preceded in death by his sister, Carol Evans and her husband Joe Neal, his brother, Stenson Washburn Jr and his wife Judy and his brother in law Carl Stubblefield, Jr. The Washburn family will receive friends at Pafford Funeral Home on Saturday, March 27th from 2-9 pm and Sunday beginning at 10 am. Funeral services are scheduled for 3:00 PM Sunday in the chapel of Pafford Funeral Home with Bro. Johnny Owens officiating and interment following at Union Hill Baptist Cemetery. The family requests in leu of flowers that donations be made to the Union Hill Cemetery Fund, attention Derrick Jowers at 557 North Broad Street, Lexington TN 38351.

Bruce Washburn, avid car enthusiast, fisherman and accomplished storyteller went to be with our heavenly Father on Friday afternoon, March 26, 2021 in Lexington. When you think of Bruce many things come to mind, some he would tell you not to... View Obituary & Service Information

The family of Bruce Washburn created this Life Tributes page to make it easy to share your memories.

Send flowers to the Washburn family.