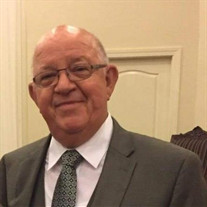 What happens when someone who is known by, “Pops”, Brother, and “The Pie Man” dies? There’s a huge void that affects a lot of lives: his family's, his former church congregations and the many, many who purchased the thousand of fried pies made by he and his wife. Called simply, “Pops” by his family, Bro. Kenneth Donald Jones went to be with the Lord on Sunday evening, August 8th, 2021 in Jackson. Bro. Jones was 71 years of age, born on Monday, August 15, 1949 to the late Kenneth and Lavon White Jones. When asked what he liked to do, he replied, “I like to preach.” For someone like Bro. Jones, preaching involved more than delivering a sermon from the pulpit at Light House Pentecostal on Sundays. He was the type of man who never met a stranger, a true “people person”, he was “real”. His ministry wasn’t confined to the inside of a church and that’s what made him such a great man. Over the fifty-one years of being a minister he pastored several congregations and touched countless hearts even while working a typical full time job and helping his wife, Loretta, make and deliver their fried pies. Hundreds of pies every week, once over a thousand pies just for one order! For Bro. Jones, this was another type of ministry. In fact, just from the sale of fried pies, it bought them a minivan that they used during his years of evangelism, it helped churches in many fund raisers and even some building funds as well. He was truly “The Pie Man”. Surviving Bro. Jones is his wife of fifty-one years, Loretta Jones; a daughter, Shelia (Kelvin) McPeake, sons: David (Tammy) Jones and Keith (Kim) Jones. There are seven grandchildren: Delana (Matt) Wonsitler, Victoria Jones, Nikolas, Makenzie and Brooklynn McPeake, Colin McDonald and Addison Jones; great grandchildren: Lexi and Luchasse Wonsitler; special family member, Jerry Fenwick; and his South Carolina daughter, Monique Tate. His brother who survives his is Darrell (Debbie) Jones and his sister, Kayron (Tom) Parker and a sister in law, Freda Jones. He is also survived by a special minister friend, Marshall Russom.Preceding him in death was his brother, Warren and his sister, Ann Benjamin. Funeral services for Bro. Donald Jones will be 11 AM Friday morning, August 13th in the chapel of Pafford Funeral Home with Bro. Alan Kirkman, Bro. William Kirkman and Bro. Scott Whitley officiating. Burial will follow at the Stone Hill Pentecostal Cemetery near Jack’s Creek. The Jones’ family request that no food be brought to the funeral home.

The family of Bro. Donald Jones created this Life Tributes page to make it easy to share your memories.

What happens when someone who is known by, “Pops”, Brother, and...

Send flowers to the Jones family.