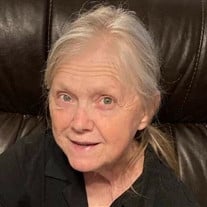 Mrs. Brenda Kay Smith, age 61, passed away on Thursday, April 22, 2021 at her home in Reagan. She was born May 24, 1959 in Blytheville, Arkansas to the late James Clayton and Shirlene Jean Hugley Brittain. She was a homemaker and a member of... View Obituary & Service Information

The family of Mrs. Brenda Kay Smith created this Life Tributes page to make it easy to share your memories.

Send flowers to the Smith family.