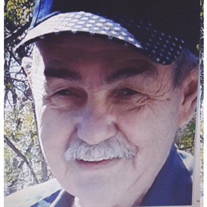 Mr. Bobby D. Hensley, age 70, passed away Sunday, April 12, 2020 at his home in Lexington. He was born August 10, 1949 in Chester County to the late Thelmer and Willie Mae Middleton Hensley. He was a retired mechanic for the Henderson County Highway Dept. and a member of Ebenezer Lodge. He enjoyed spending time with his grandchildren and in his tractor shop. He was preceded in death by two brothers, Harold and Wayne Hensley. Survivors include his spouse of 34 years, Mrs. Linda Beach Hensley; his son, Sammy Hensley; his step-son, Jay Smith; two brothers, Jerry Hensley (Tonya) and Hoyt Hensley (Nancy); his sister, Diane Rainey (Freddie); four grandchildren, Richard Smith (Ashley), Shannon Smith; Amber King (Rey); and Morgan Frye (Derek); and three great grandchildren, Aubrey, Riley, and Gracie. Private family graveside services are scheduled for Wednesday at Oak Grove Baptist Cemetery. Visitation will be on Tuesday from 4-8 pm at Pafford Funeral Home. Visitation will be limited to 10 people at a time. In response to public health concerns regarding the number of people in social gatherings, direction is included in Executive Order No. 17 issued on Sunday, March 22, 2020 by Governor Bill Lee. To limit the spread of COVID-19 so that normal life and activities may resume as soon as possible, the Governor ordered that persons in the State of Tennessee shall not participate in social gatherings of ten (10) or more people. Those social gatherings include, but are not limited to visitations, funerals, or other memorial events and burial of deceased humans (whether at a funeral establishment, church, cemetery, or other facility). This order has been extended through April 30, 2020. We respectfully ask that visitors only attend if they are fever and symptom free and we urge all visitors to only stay a brief moment of time and practice social distancing guidelines.

Mr. Bobby D. Hensley, age 70, passed away Sunday, April 12, 2020 at his home in Lexington. He was born August 10, 1949 in Chester County to the late Thelmer and Willie Mae Middleton Hensley. He was a retired mechanic for the Henderson County... View Obituary & Service Information

The family of Mr. Bobby D. Hensley created this Life Tributes page to make it easy to share your memories.

Send flowers to the Hensley family.