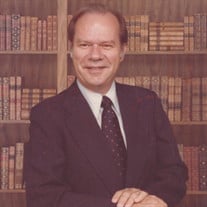 Billy Marion Johnson died peacefully surrounded by those who loved him on April 1, 2021. A native of Scotts Hill, Tennessee, Bill was the eldest of the four “boys” of Grace Austin and Coy Johnson. He graduated with a bachelor of science from the University of Tennessee before beginning his career in the Soil Conservation Service. That career took him from Covington to Trenton to Nashville, Tennessee, to Raleigh, North Carolina and finally to Ft. Worth, Texas where he was director of the Southeast Technical Service Center for the Department of Agriculture’s Soil Conservation Service. After 32 years of service, Bill retired from the SCS. Bill and Elizabeth moved to Nashville where he began a second career in real estate for Rebecca Graham Associates before retiring to Jackson, Tennessee to be near family. Bill loved the outdoors-fishing and hunting provided good times with family and friends, as well as yummy food for the table. Singing was always part of his life. The Johnsons gathered around the piano and sang during every holidays, Bill led the singing in the Church of Christ when visiting Scotts Hill, sang as a member of the Barbershop Quartet of America Chorus, and was half of a duo with his wife, Elizabeth Scott Johnson, singing in church and at many family weddings. In recent years Bill could be found leading the singing at the Meadows on Sunday evenings in Jackson, TN. He was a member of Skyline Church of Christ. Bill was preceded in death by his parents, Coy and Grace Austin Johnson, daughter, Pamela Johnson of Nashville, TN, brother, Carey Johnson and sister Ruth Helms of Scotts Hill, TN, and brother Kenneth Johnson of Jackson, TN. He is survived by his wife of 71 years, Elizabeth S. Johnson and brothers, Dr. Ralph Johnson and Dr. Larry Johnson of Jackson, TN. Services for Bill will be held at Pafford Funeral Home in Scotts Hill, TN on Saturday, April 3, 2021 at 3:00 PM with Eric Petty and Sam Wylie of Jackson, TN officiating. Graveside services at the family farm following the service. In lieu of flowers you can contribute to Skyline Church of Christ or RIFA. Visitation will be one hour prior to the service. Pallbearers will be nephews Mark Johnson, David Johnson, Bobby Johnson, Don Johnson, David Burlison, and Craig Johnson. Honorary pallbearers will be nieces.

Billy Marion Johnson died peacefully surrounded by those who loved him on April 1, 2021. A native of Scotts Hill, Tennessee, Bill was the eldest of the four &#8220;boys&#8221; of Grace Austin and Coy Johnson. He graduated with a bachelor of... View Obituary & Service Information

The family of Mr. Billy Marion Johnson created this Life Tributes page to make it easy to share your memories.

Billy Marion Johnson died peacefully surrounded by those who...

Send flowers to the Johnson family.