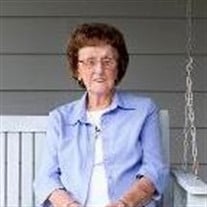 There are acquaintances you make in life that just seem to make your day brighter and returning their smile is effortless. Lexington lost one of those ladies on Sunday, May 3rd, Mrs. Betty Deere. She was a friend to many and truly never met a stranger. Betty was born on a Friday, November the 28th in 1930, in the Shady Hill community of Henderson County to the late Frank and Burcie Dyer Smith. She was the middle child of five children and had two brothers and two sisters, who preceded her in death. Betty was married to Thomas Deere until his death in 1972 and continued to be a great mother and role model to their two daughters until her death. If you ever met Mrs. Deere you’d quickly learn two things: her devotion and eagerness to share about her “girls” and other family and the importance of her church, First Baptist in Lexington. She was a faithful, longtime member of First Baptist and was also a member of Faith Sunday School Class, serving as a Group Care Leader. A ministry of talking to others on the telephone was perfect for Betty. In addition, Mrs. Deere was known in her neighborhood as the “Mayor of Dixie Street.” Living each day with Jesus gave Betty such joy. She was grateful for God’s gifts to her. At the top of her list would be her family and grandchildren, her many adventures with her girlfriends and the blue ribbon she won at the county fair with her Jam Cake. That was a bragging right she would share with you if given a chance! If you were really in Betty’s good graces, you most likely would get one of her fudge pies. Betty is survived by her daughters, Diane Patton and her husband Alan of Atoka, and Debbie Jamison and her husband Dale of Brentwood. There are five grandchildren: Meg Jamison and her husband, James Addison; and Mary, Julia and Joy Jamison; and Matthew Patton. Betty was also a step-grandmother for most of his life to Christopher Patton (Peggy Sue), and a step-great grandmother to Max Patton. Her nieces and nephews loved their Aunt Betty and knew she loved them. “I-40” was another nickname for Mrs. Betty, so earned as she kept the road hot between Memphis and Nashville while her grandchildren were growing up. As her oldest grandchild, Meg, noted, “She would do anything for her grandchildren. She showed up for every graduation, dance recital, and any other special event her grandchildren were involved in.” Meg also noted that the way her grandmother lived left no room for giving up, backing down or tiring out. “She was the strongest and most courageous woman I’ve ever met,” was Meg’s tribute to her grandmother. Graveside services will be held at Rock Hill cemetery in Henderson County on Saturday, May 9 at 1:30 pm with Rev. Tommy Crocker officiating. Betty had many friends and you’re welcome to attend the services, but the family stresses the importance of social distancing, maintaining groups of less than ten. The use of facemasks is your option. The family will receive waves and words instead of hugs and handshakes due to the current pandemic. If you wish to send memorials, the family has noted the following ministries: First Baptist Church in Lexington, TN; Williamson County Young Life in Brentwood, TN; and Church Health in Memphis, TN.

There are acquaintances you make in life that just seem to make your day brighter and returning their smile is effortless. Lexington lost one of those ladies on Sunday, May 3rd, Mrs. Betty Deere. She was a friend to many and truly never met... View Obituary & Service Information

The family of Mrs. Betty Deere created this Life Tributes page to make it easy to share your memories.

There are acquaintances you make in life that just seem to make...

Send flowers to the Deere family.