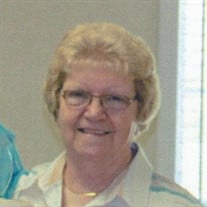 “I have fought a good fight, I have finished my course, I have kept the faith. “(2 Timothy 4:7) Barbara Jean Wallace Russell fought for over 30 years and on July 4, 2021 she finished her course, all the while keeping her faith and living that faith out day by day. Born February 4, 1944 in Jackson, Tennessee to the late Millard “M.C.” and Clara Myrtle Carrington Wallace, Barbara was around 2 years old before she met her daddy, who was stationed in the Philippines in WWII. After his return, the family of 3 gradually grew to become a family of 9! Barbara took great care of her 4 baby brothers and 2 baby sisters, earning her the nickname of “The Boss”. She graduated from Lexington High School in 1962 and moved to Memphis to attend Draughon’s Business School. While there, she met Hugh Russell and they were married on April 25, 1964 after only 6 short months of dating! The union was blessed with their first daughter, Kimberly Renee, in 1966 and the second, Regina Kaye, in 1972. Shortly after that, Hugh and Barbara decided to return to her home in Darden, where they built their home and have resided for the last 48 years. Barbara went to work for Helms Motor Company in 1975 and after “retiring” to 3 days a week in 2018, she continued there until her health rendered her unable earlier this year. The Helms’ and her work family were very dear to her. First diagnosed in late 1990, Barbara fought cancer on and off for over 30 years, working through it all with a smile and with her loving husband always by her side, taking care of her, and never losing their faith. She was raised in and returned to Mt. Ararat Baptist Church in Darden, where she was an active member, taught Sunday School, was church Secretary, and rarely missed a service. She dearly loved her church and her church family, but most importantly she loved her Lord and wanted others to know Him too. She lived her faith daily with her strength, courage, patience, love, and generosity. Her faith, loyalty, dedication to her family and her church are just some of the things she will be remembered for most, as well as her cooking! She was a fabulous cook and often said that was her “therapy”. She cooked Sunday lunch for her family every Sunday up until the last few months, and insisted that it carry on with her daughters and Hugh taking over the cooking duties. She loved her family, especially her grandchildren and great grandchildren who lovingly called her “Gran”. She was an amazing wife, mother, sister, aunt, and “Gran” and she will be greatly missed. Barbara was preceded in death by her 2 sisters, Beverly K. Latham and Patricia Ann “Trix” Larsen. Survivors include her husband of 57 years, Mr. Hugh H. Russell; her 2 daughters, Kimberly Renee Ivy (Dale) and Regina “Gina” Kaye Woods (Brian); her 4 brothers, Curtis Lee Wallace (Gina), Donald Wallace, David “Corny” Wallace (Maggie), and M. C. “Junior” Wallace, Jr. (Lou Ann); her 6 grandchildren, Lynleigh Rianna Butler (Lain), Carrington Elizabeth “Caty Beth” Woods, Mason Parker (Destiny), Carson Woods (Camryn Scott), Whitney Funderburk (Jared), and Ashley Whitlock (Dustin); and her 6 great grandchildren, Layton, Avery, Cecelia “CeCe”, Lainey Claire, Laken, and Annie. The family will receive friends on Monday from 2-8 PM at Pafford Funeral Home in Lexington and on Tuesday 9-11 AM at Mt. Ararat Baptist Church in Darden. Funeral services will be at 11 AM at Mt. Ararat Baptist Church with burial to follow in the church cemetery. In lieu of flowers, the family request donations to be made to Tennessee Baptist Children’s Home or The Gideons International. Pafford Funeral Home

&#8220;I have fought a good fight, I have finished my course, I have kept the faith. &#8220;(2 Timothy 4:7) Barbara Jean Wallace Russell fought for over 30 years and on July 4, 2021 she finished her course, all the while keeping her faith and... View Obituary & Service Information

The family of Barbara "Gran" Russell created this Life Tributes page to make it easy to share your memories.

“I have fought a good fight, I have finished my course, I have...

Send flowers to the Russell family.